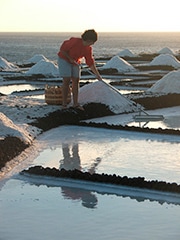 The salt works of Fuencaliente are the origin of our snow-white Flor de Sal. They are also a family-run business located in the UNESCO biosphere reserve of La Palma. The Canary island – also known as “The Beautiful One” – is situated within the vastness of the Atlantic Ocean, at the level of the Sahara desert.

White gold in the midst of black lava 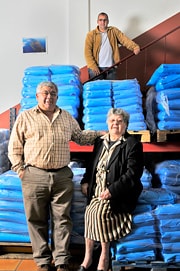 At the far southern tip of La Palma, at the foot of the Teneguía volcano, lie the saltworks of the Hernández family. These are the only saltworks on the greenest and most northwestern of the Canary Islands. The small family-run business was founded in 1967 by the grandfather of the current owner Fernando Hernández. And Fernando has meanwhile entrusted his son Andrés with the management of the business. Together with four employees, father and son are responsible for the production here, in this lonely region. The Salinas Marinas de Fuencaliente is located in a so-called “nature reserve of scientific interest”. The site itself is one of the few Canary wetlands and offers habitat for migratory birds, almost extinct plant species, the saline crayfish and rare sea algae. Not even the mailman reaches into this remote area and instead delivers any mail for the saltworks to a petrol station in Fuencaliente, five kilometres away. “After sunset it’s so dark here that you can’t see your hand in front of your eyes,” Fernando says.

White gold in the midst of black lava

It is difficult to extract sea salt – everything is done by hand. The Atlantic water is pumped into small basins where it gradually evaporates over several weeks. In the beginning, the sea water contains about 36 grams of salt per litre. The water then gradually flows downwards in terraced salt basins – the salt concentration increases from step to step. In the lowest basin, each litre contains about 250 grams of salt. The next production step takes place within the crystallization basin. Here you can almost watch the salt grow inside the water until it reaches a concentration of 360 grams per litre. Eventually, the workers harvest the salt with rakes, scrapers and sieves. In the corridors between the basins, they pile up the salt in large pyramidal heaps so that it can dry out completely in the sun. All this is hard work and everything is done in the blazing sun. “The gradual evaporation of the water only by the sun guarantees the high quality of our fully ecological salt,” says Andrés. Valuable ingredients such as calcium and magnesium chloride are retained. The season stretches from May to November. Six to eight salt harvests are conducted during this period, which amounts to a total of up to 500 tonnes of sea salt. Salt production is suspended in winter. “The rain and the wind would impair the quality of our salt,” explains Andrés.

Royal seasoning from the sun and the sea

During the season, the Hernández family harvest the valuable Flor de Sal on a daily basis, but only in the evening hours. Because the queen of salt only reveals itself at dusk when the trade wind that would destroy the blossom of the salt has grown quiet. The fine “salt cream” must be carefully skimmed off with a special sieve. Andrés and Fernando do this themselves every day around 7 p.m. when their workers are already off work. Per person and day, they harvest about 20 kilos of Flor de Sal in three hours. Over the entire season, this amounts to about three tons. Almost the entire annual production is delivered exclusively to HERBARIA. This makes the organic company the one and only German business to sell the valuable Flor de Sal from La Palma. And the quality is simply unique.

You will find Flor de Sal in the following products 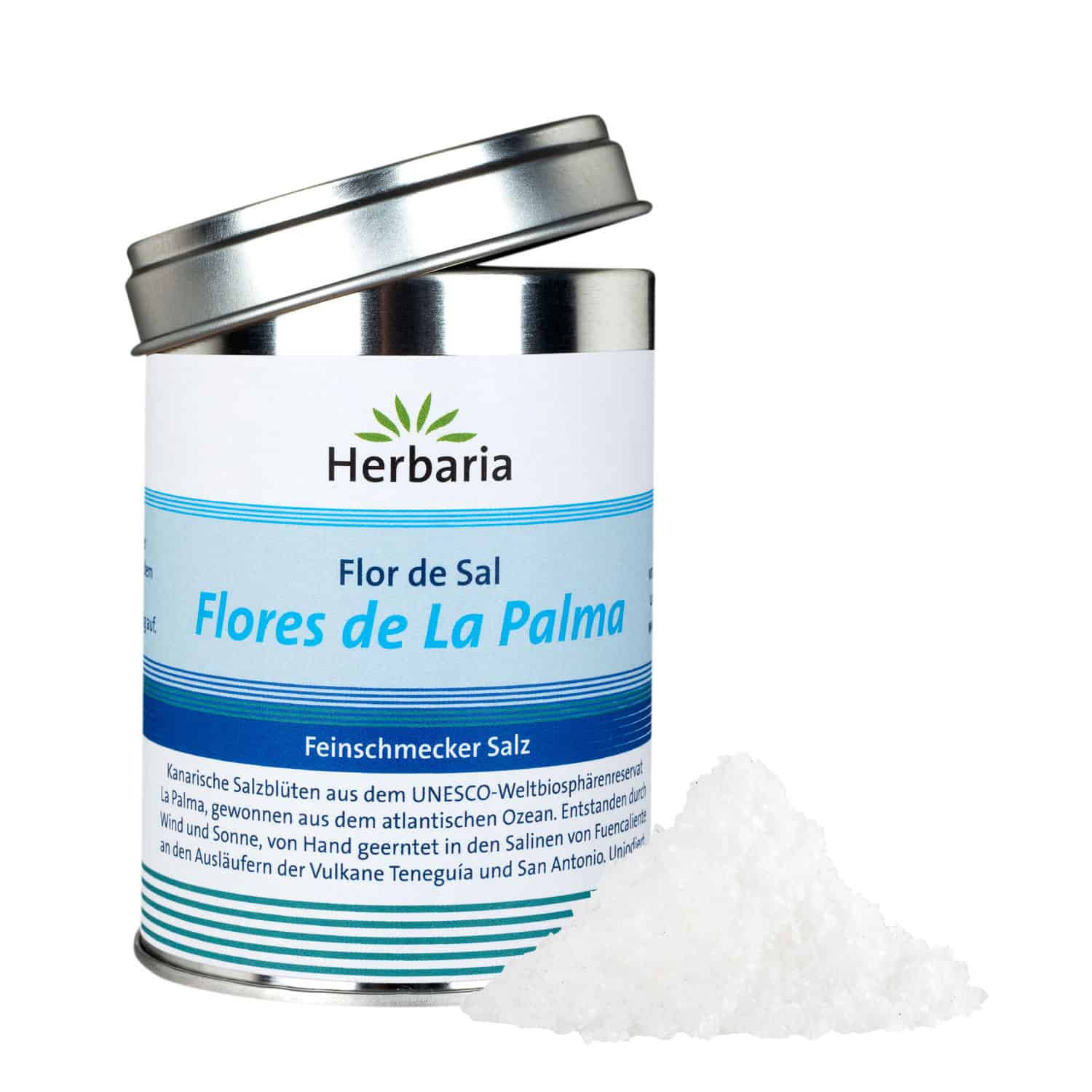 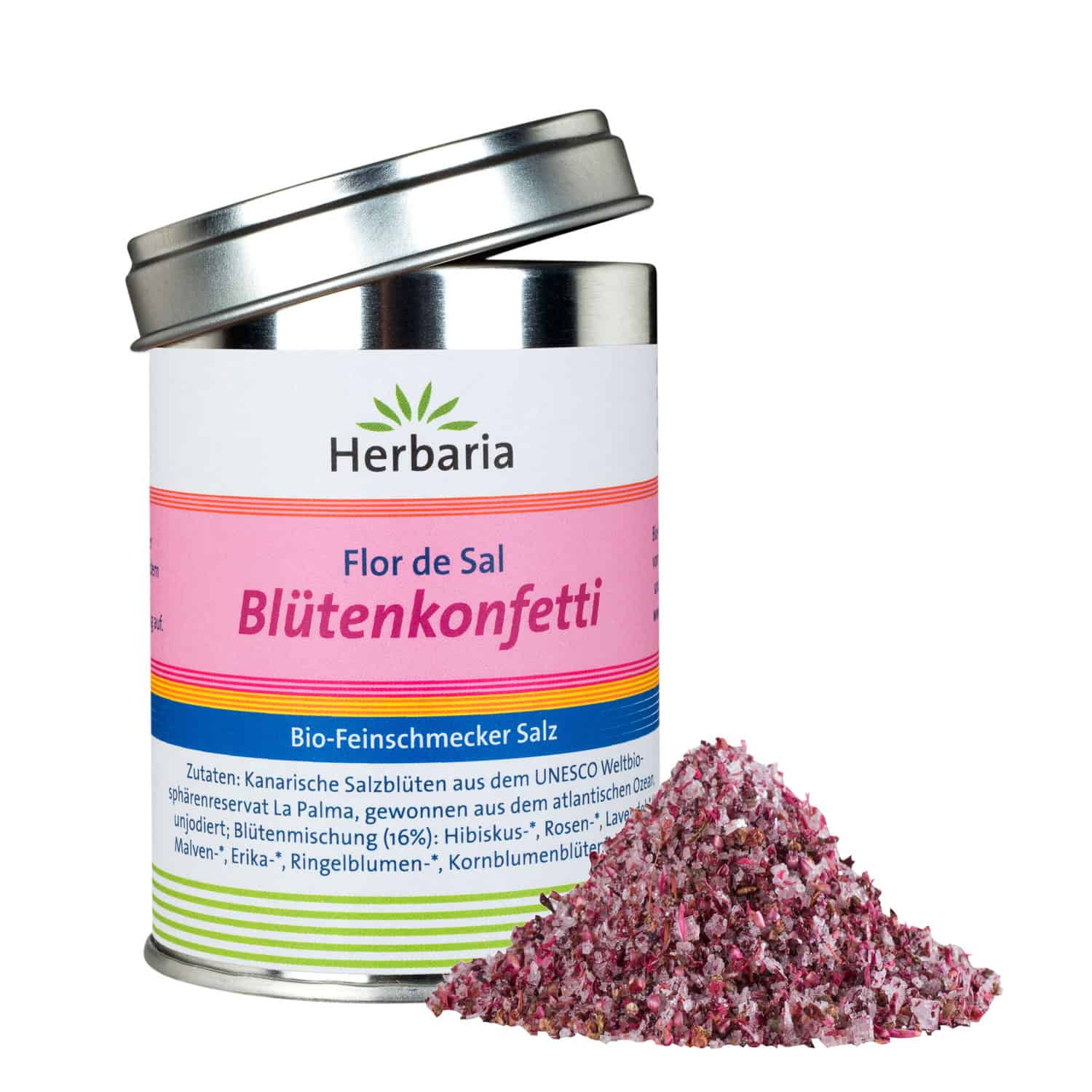